Enzpirg: on the Trail of Prehistory

Enzpirg (also called Trenz Birg) is the name of a crest of hill which overlooks the Etsch Valley. From the Schadnerhof one can reach it comfortably in about half an hour. 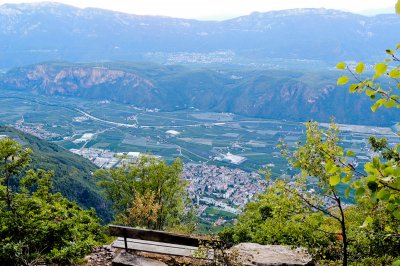 Leaving the Schadnerhof you take route Nr. 10 turning west. After about 1 km you turn left and follow the sings until you reach Enzpirg.
Enzpirg is something very special. First of all, because of its breathtaking view of South Tyrol’s Southern part from above and, secondly, because of its secretive past. Legends tell of a castle which crumbled a long time ago and whose traces over the years have nearly totally been obliterated. Indeed today one can only recognize the remains of the exterior and interior stone wall on a stony hill overgrown with trees.

That is why they talk about a “Wallburg” which simply means a castle surrounded by a wall.
During excavations clay shards and bone remains were found from which historians deduced that this site used to be a prehistoric place of sacrifice. However, if one looks at the defensive area on the hill (it is only easily reachable from the East) one can also assume that Enzpirg, at least for some period of time, was a refuge castle where people could hide and defend themselves in dangerous times.

In the course of the centuries there were many dangerous times, as the Brenner route, being a direct connection between North and South, was the location of fierce conflicts. This necessity of defense would also explain the stone walls.
In the absence of historic facts, more knowledge about Enzpirg is left open to our imagination. One can do so by enjoying the lovely view from this mysterious place, and simultaneosly day dreaming about what Enzpirg had looked like thousands of years ago.
Welcome » The farm » Enzpirg